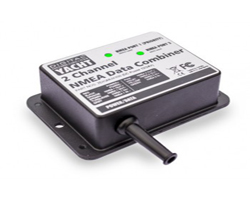 MUX100 NMEA Multiplexer is a 2-channel NMEA0183 combiner (multiplexer) that improves connectivity on boats like never before. Previously, it was impossible to connect AIS data and GPS data at 4800 baud to chart plotters/PCs with just 1 NMEA 0183 output. MUX100 solves this problem by allowing transmissions for both 4800 baud and 38400 baud data.

Currently, when an AIS transponder is present, the VHF will ignore GPS data available at 38400 baud. GPS data from high speed 38400 baud can be scaled down to 4800 baud to be connected to DSC VHF radios to give position information.

We recommend the MUX100 for boat that have an AIS transponder installed and do not wish to have a separate GPS antenna. The MUX100 is pre-configured to have input 1 accepting AIS data at 38400 baud and input 2 accepting GPS data at 4800 baud. For easy fault finding, there are 2 LED lights. If either is not lit, no NMEA data is being transmitted or received.